In May of this year, eMarketer predicted that programmatic advertising spend would surpass $115 billion in the US in 2022. Jounce Media released a report estimating that about 12% of programmatic display ad budgets go to Made for Advertising (MFA) websites.

MFA websites operate with the sole purpose of maximizing ad profits, at the expense of quality content and user experience. This means that potentially billions of ad dollars per year are wasted on websites that do not provide any discernible ROI for advertisers.

Made For Advertising is a significant issue for advertisers and the digital marketing industry at large, and one that should be on the mind of every media buyer today. This article will serve as a primer on the concept of MFA sites, and offer ways to spot and avoid them in your advertising.

What Does “Made for Advertising” Mean?

Made for advertising websites are created solely for the purpose of ad arbitrage. They  focus their efforts on aggressively generating traffic to their websites, often through search engines and social media platforms like Facebook, TikTok, or Instagram, for a lower cost than they make by selling ad space.

This is accomplished by creating filler content, clickbait headlines, networks of interlinked websites, and multi-page articles just to increase the number of display and video ads that can be shown to individual users.

Because the goal is on maximizing ad impressions, the content and user experience on MFA sites is well below what most advertisers would expect when paying for ad placements. Users are inundated with ads, presented with confusing user experiences, and even false navigation buttons, all in an effort to maximize the number of pages viewed per session, and the number of ads clicked.

MFA sites might also employ tactics like pixel stuffing or ad stacking that are designed to load as many ads onto the page as possible, even if they cannot be seen by the human eye.

This creates complications for advertisers who want to ensure that their ads are appearing alongside content that is both of a certain quality, but also complementary to their brand. MFA websites can be detrimental to a brand’s reputation, even if the ad placement isn’t intentional.

According to Ebiquity, Made for Advertising sites are attractive because they deliver above-average results. They found that MFA domains deliver a viewability rate of 77% on average, compared to the Word Federation of Advertisers’ digital media benchmark of 63%. They also typically have a CPM that is 30% to 40% lower than non-MFA websites.

Of course, high viewability is great for anyone who focussed on that as their core KPI. For most advertisers, low-intent clickthroughs – even above average viewability– is simply a waste of money. And therein lies the problem with MFA websites.

Should you be concerned about Made for Advertising websites?

To put it bluntly: yes. Made for Advertising websites are a major concern for the programmatic digital advertising industry, and drive billions of dollars to low-quality (and sometimes nefarious) websites and content every year.

For advertisers, the concern is two-sided: First, MFA sites can harm the efficacy of your advertising efforts by funneling spend to websites that simply won’t generate business results. Second, aligning your brand with the content and user experiences shown on Made for Advertising websites can slowly erode the perception of your company in the market.

More specifically, inadvertently placing ads on Made for Advertising websites can have the following impacts:

“These websites are not really publishers in that they have a brand, a loyal audience, or anything resembling a content strategy,” Myles Younger, Senior Director of Data Practice at Media.Monks told Marketing Brew. “They’re just vessels for the convenient monetization of third-party cookie data. It’s nothing but a numbers game for them.”

Unfortunately, that numbers game is a very lucrative one that is growing year over year. The chart below from Jounce Media shows that bid requests from MFA ad inventory are actually increasing at a rapid rate quarter over quarter. 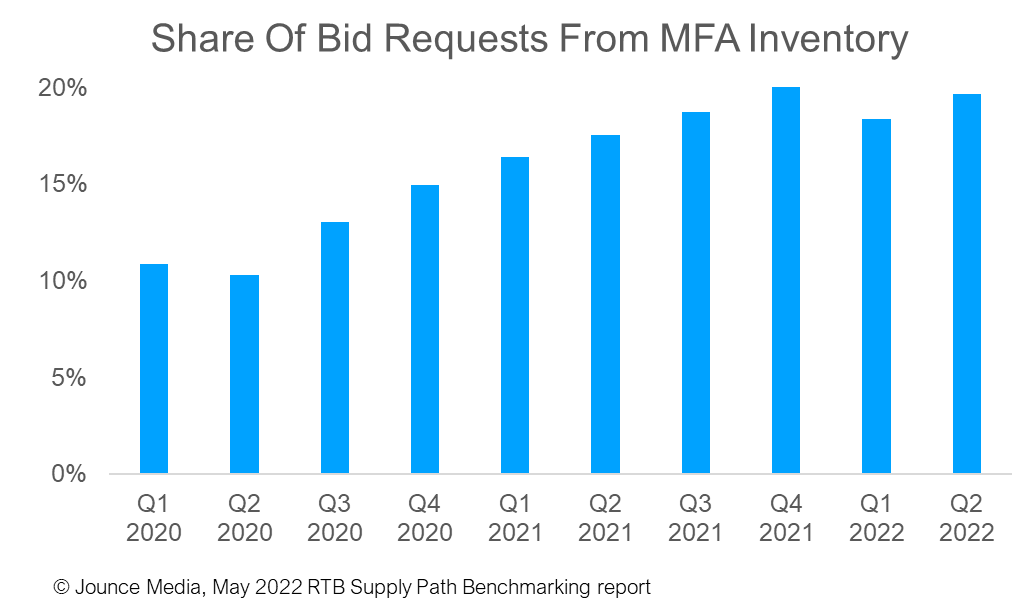 Unfortunately, while some publishers are making huge profits off of the MFA game, legitimate news sites and quality publishers like Vox are all potentially missing out on much-needed advertising revenue.

Is "Made for Advertising" Ad Fraud?

This is where things get a bit tricky. Technically, MFA does not rise to the level of ad fraud and, therefore, is not illegal. It does, however, employ tactics like ad stacking and pixel stuffing that are also used in ad fraud schemes. But, Made for Advertising does not attempt to outright defraud advertisers by artificially inflating things like impressions, clicks, and conversion data through illegal means.

So, Made for Advertising websites can be placed firmly in the gray area between ad fraud and legitimacy. Here’s the difference between MFA websites and ad fraud.

Ad fraud, as mentioned, is an illegal practice that intentionally inflated key advertiser metrics for personal gain. The overarching goal is to make money through wasting advertisers’ budgets by tricking them into purchasing from an ad ecosystem that will not be seen by their intended audience. The key here is that ad fraudsters inflate performance metrics to make it seems like ads are performing when, in fact, they’re not.

Much like Made for Advertising websites, ad fraud is very damaging to the digital advertising space, costing advertisers an estimated $44 billion per year.

And while MFA sites come near the level of ad fraud, they don’t fully cross the line.

Most Made for Advertising pages are not in compliance with Google’s ad placement policies, and may be penalized at the platform level. To get around this, publishers often avoid using Google Ads altogether, and instead go through platforms like Taboola or Outbrain that have more lax placement policies.

MFA publishers are very good at toeing the line with various supply side providers, ensuring their websites and ad placements meet the minimum standards requirements for advertisers. As such, many Made for Advertising sites aren’t technically doing anything wrong, even though the intention is clearly to inflate ad profits as much as possible.

MFA websites come in many different varieties, but the telltale sign for all of them is overlapping or redundant ad placements crowding the content.

Take the two examples below. Both are running ads in at least four spots along the side of the content. On high-quality websites, this real estate would usually be taken up by related content or complementary information. Here, the emphasis is clearly on maximizing the numbers of ads.

Four sidebar ads and one bottom banner ad for a short piece of content. Plus two “Next Post” navigation buttons designed to push the reader to other pages with more ads. 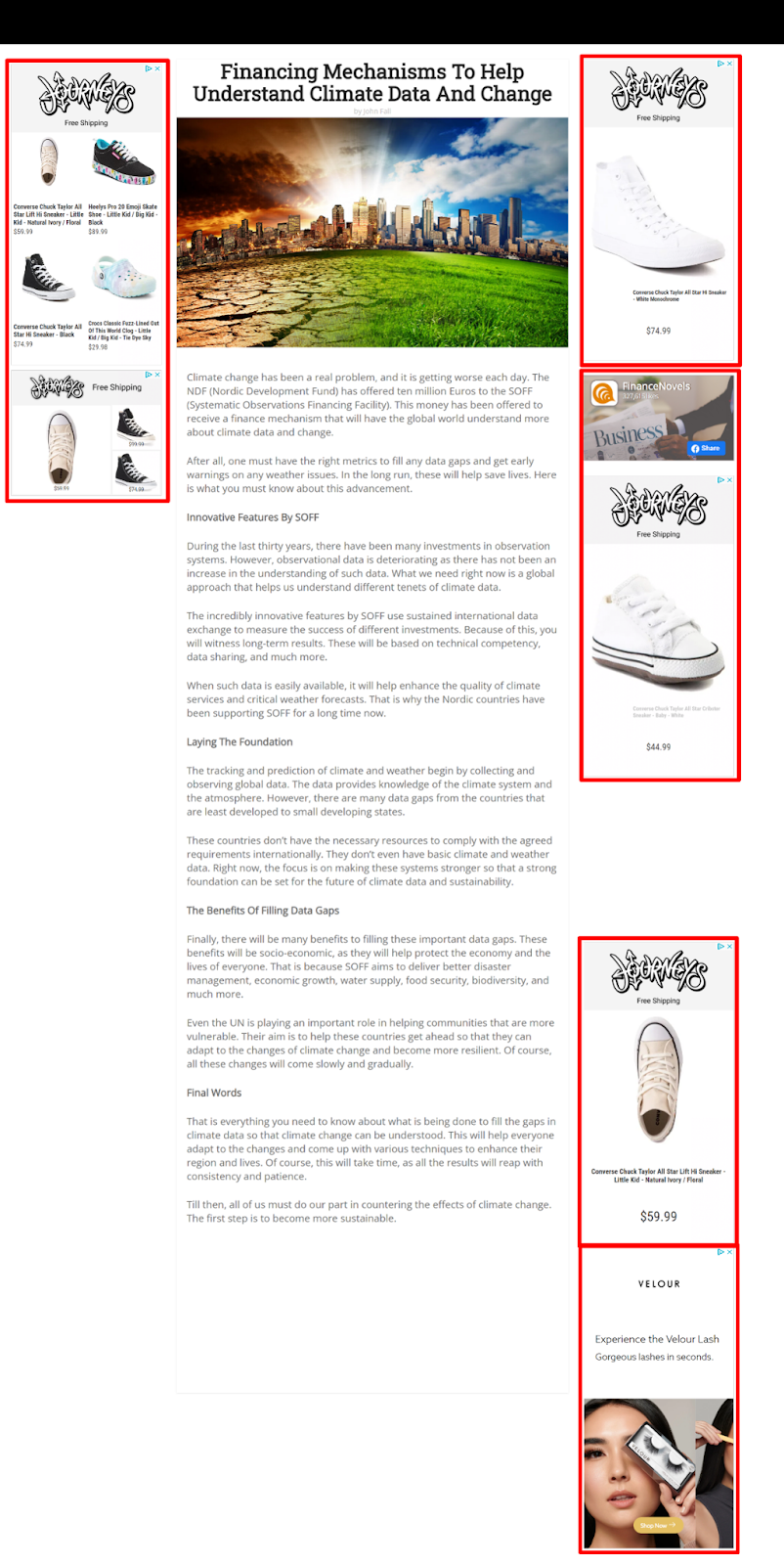 Five sidebar ads that actually bleed over the length of copy. Ads take up more real estate on this particular page than content does.

Another sign that you’re looking at a Made for Advertising website comes from browser plugins like AdBlock. They can detect how many ads are loading on a specific page when you navigate to it.

Fou Analytics has another tool for analyzing a page to look at ad traffic, requests, as well as external and internal links on a page. 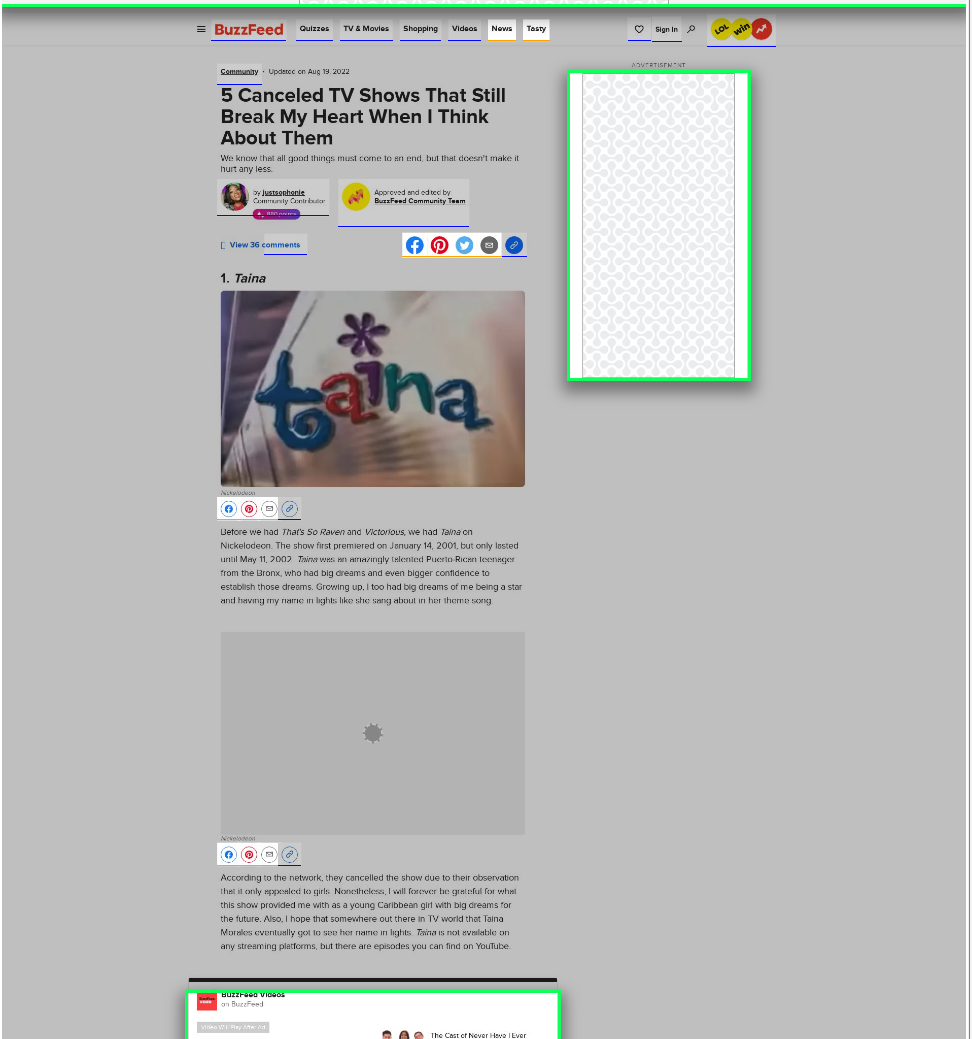 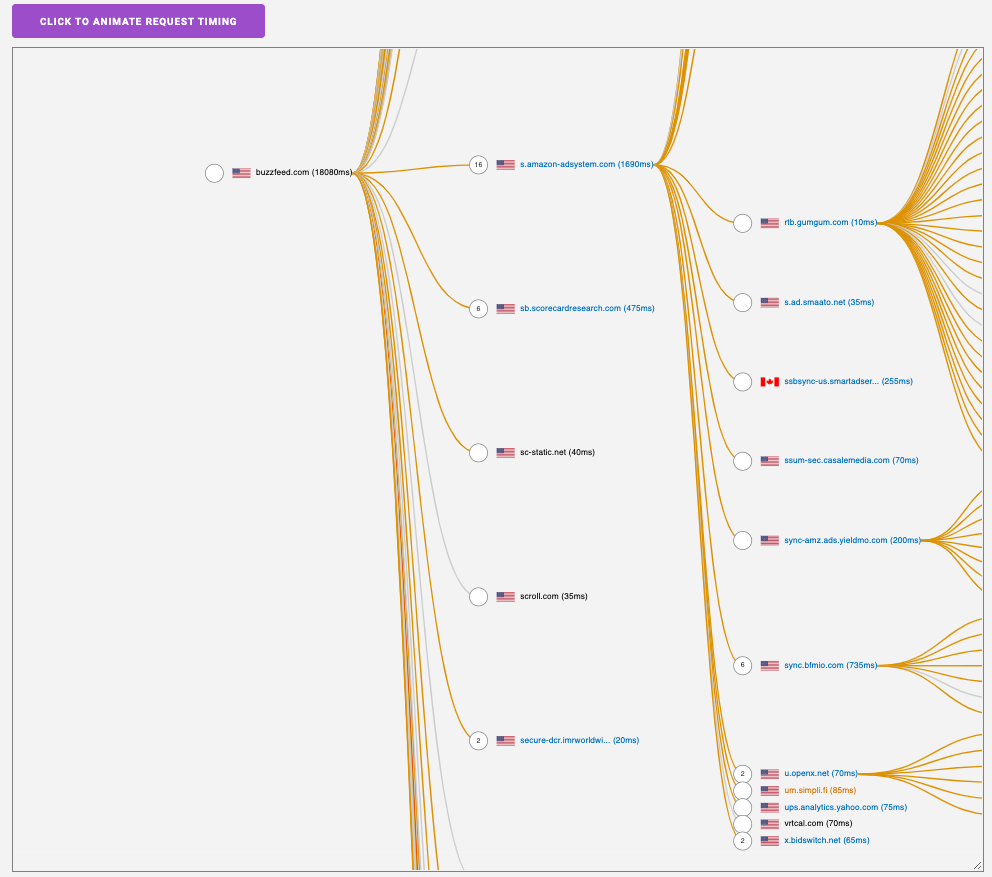 These are the various calls being made between ad servers, DSPs, and other sites

You can compare what requests are being made to what appears on a page to look for ad stacking or pixel stuffing techniques. They increase the number of ads that load on each page, thereby increasing the money they make from advertisers, without regard for what a given advertiser might be paying to display on a page.

How to Avoid Made for Advertising Sites

Advertisers who want to avoid funding MFA placements have tools available to them to ensure that their ad spend isn’t going to these types of publishers. There is lots of finger pointing going on in the industry about who is responsible for solving this problem, with no clear answer.

Many supply side platforms have policies in place that forbid publishers from employing Made for Advertising site tactics. But they are often not enough to dissuade the practice, and developers can easily game the controls. Some SSPs also put the onus on media buyers to vet the website they are advertising on, and manually exclude them.

Publishers, on the other hand, often say that it’s up to the SSP to dictate and enforce publisher quality controls. Their argument is that they are simply playing within the rules that have been given to them.

Stuck in the middle are advertisers who need to decide what additional steps they can take to protect their brand and ad spend.

More and more advertisers are beginning to use data to identify and act on poor practices from supply side partners and publishers. As a result, of the latest reports on MFA pages, 39% of marketers have said they cut spending with a major platform.

Another tactic is to form a partnership with ad tech companies who are taking an explicit stand against MFA content. Platforms that leverage contextual data to drive brand suitability controls are leading this charge for advertisers.

Peer39, for example, has built a custom category called “Made for Advertising Fraud Pages”. This is a prebid category that prevents advertisers from bidding on placements on sites thatPeer39 has identified as falling within the category of MFA. The category is continuously updated and can be added as an exclusion list through your DSP, giving advertisers a powerful brand suitability optimization tool.

Additionally, Peer39’s custom contextual categories allow advertisers to only target content that is contextually relevant to their target audiences. This, coupled with brand suitability controls, will ensure that advertisers avoid placing their ads next to potentially harmful or wasteful content.

For more information on how to set up custom categories to avoid Made for Advertising sites, fill out the form below.